In my ongoing quest to make as many spreadsheets and graphs as possible, I pulled my reading history from Goodreads for 2016. Last year saw me through my last semester of coursework, and the entirety of my comprehensive exams, both of which I expected to have a pretty substantial influence on my reading habits. I’ll be curious to compare the stats to other years some time, but for now, let’s dig in to the 60 books I read last year!

What did I read, and why? 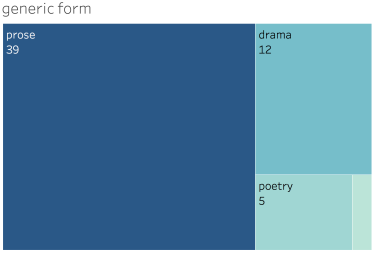 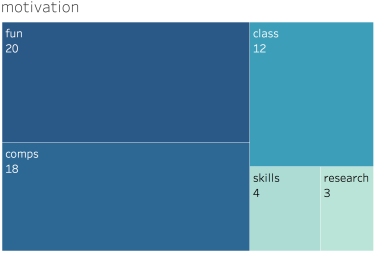 Comps had a smaller impact than I’d expected, probably because most of the things I was reading weren’t “books” in the sense that could be tracked by Goodreads, but poems and short works. I read or skimmed all of the Norton Anthology Volume A for comps(on Medieval literature — the shortest volume, and early in the process when I had maximum enthusiasm), but that only appears as one “book”!

Who were these books by? 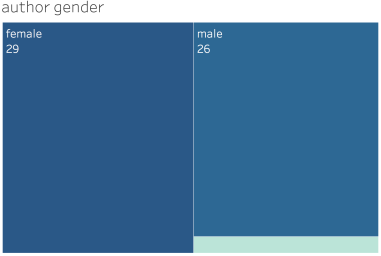 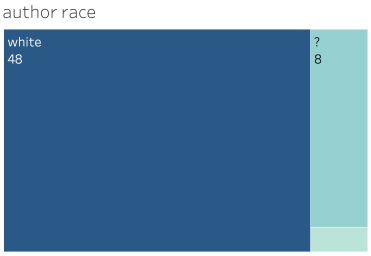 I was worried that life in the ivory tower was going to lead to a more male-dominated reading list, so I’m quite pleased with those gender numbers! I’m… less pleased with those number on race. Kinda some textbook White Feminism TM on display here.

I’m even more embarrassed that my only work by a nonwhite author, The Autobiography of Frederick Douglass, wasn’t totally of my own choosing (since it was for comps) and I didn’t really finish it.

If I assume that “Clorinda Cathcart,” the pesudonymous author who constitutes my “?”, is also white, then things look even more dire: 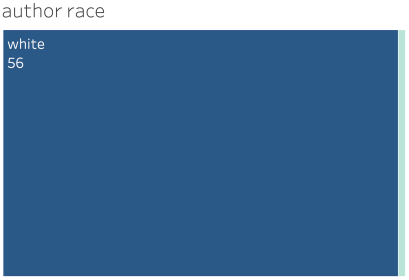 Yikes. Um… anybody have any book recs to help on this front…?

When were these books written?

This question turned out to be much harder to answer in Tableau than I expected, since Tableau thinks 90% of what I read is too old to really care about. Seriously: Tableau counts dates forward from 1/1/1900, so you have to use negative numbers to input dates earlier than that! Thanks to this helpful post, I figured out how to fake it by just using the years as numbers, which yielded the following:

This seems like a remarkably even chronological dispersion! I suspect my comprehensive exams are responsible. 2017, my special fields year, is likely to look much more clustered.

How queer were these books?

This is the only metric of the books’ content that I decided to explore. 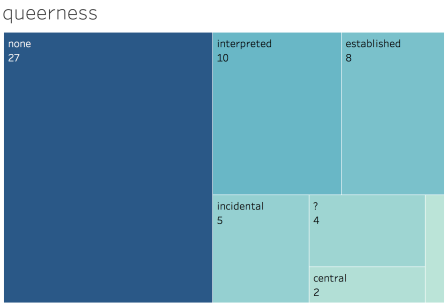 …I have no idea whether this is a lot of queerness or not a lot! I was faced with a classification problem re: books that predate contemporary ideas of queer sexuality (i.e., most of the books I read). When a book is classified as having “interpreted” queerness, what I mean is that I described it to my friends with anachronistically queer vocabulary, i.e., Venice Preserv’d is about a man named Jaffeir and his wife Belvidera and his boyfriend Pierre, and so Venice Preserv’d contains “interpreted” queerness.

The “?” means I can’t remember now (or never read the book closely enough to determine for sure) whether there is anything a bit queer in there — it seemed unfair to guess. The “teased” queerness is the TRAGICALLY UNFAIR murder mystery The Ice House by Minette Walters, which ostensibly opens with a polyamorous lesbian triad, but turns out to contain no such thing. (I spoil this plot development for your own benefit.)

How does this stuff correlate?

This is the exciting stuff! 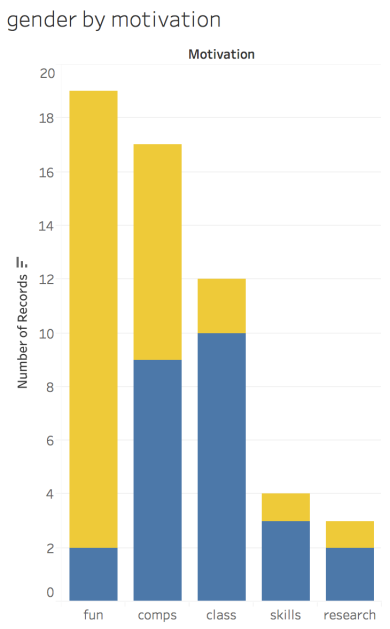 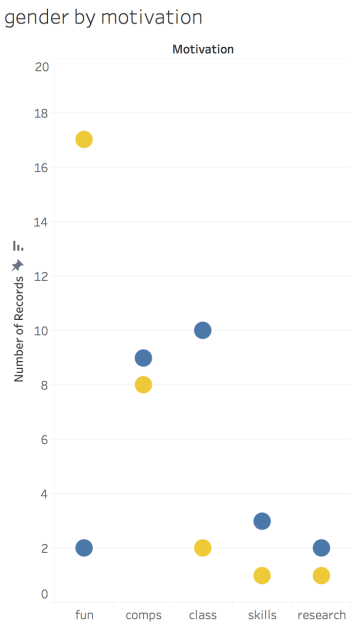 These are still a bit “in progress” — for one thing, I couldn’t figure out a good way to add a legend, so I have to tell you where that male is blue and female is yellow. These graphs both show the same thing, but I’m not sure which is more useful as a way to display it. The bars make it easier to see that, for example, I read more books for comps than I did for class — but the dots make it easier to see that comps were more gender-balanced than my coursework.

Refreshingly, the queerness was not confined to my “fun” reading, but showed up in class and comps too! It makes complete sense that “skills” books, like “How To Write Your Journal Article In 12 Weeks,” do not include queer content. 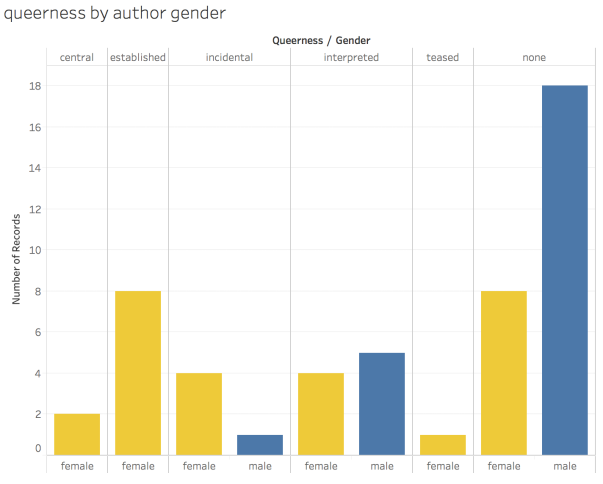 However, it looks like the author’s gender does have a big impact on queerness! This is probably in part the outsized influence of all eight volumes of Clorinda Cathcart’s The Comfortable Courtesan, which is sort of the literary equivalent of lying on a chaise longue wearing fuzzy slippers and eating bonbons (all of which, incidentally, I often did while reading) — the story has all the pleasures of 18thC literature with none of the often-distressing 18thC attitudes.

Poetry seems pretty evenly scattered, but you can sure see the influence of my class on 17thC to 18thC drama! Or, perhaps, the increasing prominence of prose over time.

Old books mostly by men, except for those women at the turn of the 19th century… which also constitute my old books that are for fun.

It’s interesting how these three ways of colouring the identical graph encourage different mental ‘splits’ — looking at form makes the turn of the 19th century seem like a major transition in literature, from drama to prose, but that fulcrum is invisible in both the other graphs.

The more I look at it, the more hilarious my idea of “fun” turns out to be: it’s mostly variously recent literature (probably sci fi and murder mysteries), but with a precisely focused interest in two specific decades 1790-1810. Which I freely admit already, but haven’t seen represented so starkly!

Apparently, after I finished my exams at the beginning of September, I read almost exclusively books by women for the rest of the year.

This is also here just to be a general purpose graph of when I read everything — I didn’t finish my first book until January 19, and then had some fluctuations throughout the year. May was ostensibly my first month studying for my comprehensive exams, but all those early texts must have not been “books” — December was much, much busier!

All right, one last graph, to wrap things up with a look at my experiences over the course of the year.

I think this captures my year of reading remarkably well!

I like how the “fun” books on either side of the “class” books mark the start and end of the busy parts of the semester… and you can also see me finishing up the last of my seminar papers in April. Then comps is another big uninterrupted stretch of focused reading, also bookended with “fun”. And since then things are a big colourful jumble!

This was a somewhat deeper dive into the data than I really expected to do, but it also barely scratches the surface. After all, I haven’t even gotten into the matter of comparisons! I have some ideas to shape my next year of reading, and am excited to see what it will look like.